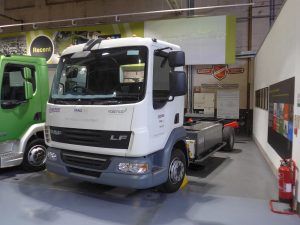 For over seventy years battery-electric vehicles held a small but important place in British commercial vehicle operation. Even though most people will think of milk floats, they performed a fascinating range of other roles. As we enter an era where battery-electric vans and smaller trucks are likely to take the largest share of new registrations within perhaps as little as ten years, it is a good point to look back at their history in Britain.

The decade-by-decade account is followed by the story of some of the more prominent battery-electric manufacturers sold in Britain (expanding on what is said about them in the main history).  The depth I go into depends on the information I have been able to find (and be confident about the veracity of) which means that some areas are perhaps a bit heavy on detail and others rather light. But this is not a book, it’s a web resource.  As new information comes to light I hope I shall be able to fill in the gaps or strengthen the material.

I haven’t consulted other people in building this story, nor have I checked any facts with them. So you can blame me for any absences, inaccuracies and falsehoods. Better still, please put me right by posting a comment (I shall acknowledge you by first name if you like). That said I have found a number of excellent sources of knowledge about the industry and its participants. See the bottom of this page for more about them.

A note about illustrations.  The part of this web-site devoted to a history of electric vehicles is claimed as 'non-commercial research'. Any illustrations which are uncredited are either produced by me, or I believe to be in the public domain.  Where illustrations are under a collective commons licence, this is indicated by the name of the creator followed by 'CC BY-NC-SA 2.0'.  This means the image is presented under the Attribution-NonCommercial 2.0 Generic licence.  The team at the superb Commercial Motor archive has kindly given me permission to use scans of their images.  To find the story behind a particular image, go to Browse | The Commercial Motor Archive  and select the edition and the page number quoted.   Graces Guide has also been an invaluable resource.  Given their age, I have taken images from Electric Vehicles by Charles Marshall (1925), and Battery Electric Vehicles by S. M. Hills (1943).  Generally speaking, publicity photographs from defunct organisations are believed to be free to use.  Material taken from contemporaneous marketing and technical literature in my possession is credited as 'EW collection'.  In the case of modern vehicles, images are taken from manufacturers websites which are presumed to be free to use for this kind of purpose.  If you see an image which you think is misattributed or is being used without proper permission, please let me know and I shall take it down at once.

Commercial Motor magazine. Various editions from 1905 onwards, consulted in Leyland Vehicles works library in the 1980s. This material is now largely available at archive.commercialmotor.com which is a tremendous resource, giving a truly contemporaneous view of the industry and the issues it faced at any particular time.
Graces Guide. This web-site provides copious information about the history of British firms, along with lots of stuff about their activities and products. So there is plenty about the battery-electric vehicle makers and their customers.
You see them everywhere. Luton: Vauxhall Motors, 1978. All about Bedford vans and lorries.
Aldridge, A. (2013). Co-operative transport - Nostalgia Road. Manchester: Crecy. A few insights into how one of the largest operators of battery electrics employed them.
De Boer, R. (2014). Glancing back at old EVs. Greenfleet.net/features/18092014/glancing-back-old-evs. An interesting web article.
Desmond, K. (2020). Electric trucks – a history of delivery vehicles, semis, forklifts and others. Jefferson, NC, US: McFarland & Company. The most comprehensive modern history available, but not without some basic factual errors.
Georgano, N. (ed.) (1979). The complete encyclopedia of commercial vehicles. Osceola, WI, US: Motorbooks International.
Georgano, N. (1996). Electric vehicles – Shire album 325. Princes Risborough, UK: Shire Publications. A solid overview, but not too much detail.
Guy, the company and its vehicles. (c. 1961) Wolverhampton, Guy Motors (Europe) Ltd. Has a photo of the 1922 battery-electric.
Hills, S. (1943). Battery-electric vehicles. London: George Newnes. An important book that summarised the state of the industry in the middle of the Second World War.
Marshall, C. (1925). Electric vehicles. London: Chapman & Hall. Probably the first comprehensive look at battery-electric commercial vehicles in Britain.
Miller, D. (1982). The illustrated encyclopaedia of trucks and buses. London: Hamlyn. Short accounts of the history and products of all the main manufacturers and plenty of the obscure ones.
Roberts, K. (2010). Electric avenue. Neath, UK: Bryngold Books. A real insider’s view of Morrison-Electricar and its descendants, written by Crompton Electricar’s one-time marketing boss.
Roberts, K. (2) (2015). Electricars Limited. Vintage Roadscene, August, p28. A great article about one of the most important manufacturers of the twenties and thirties.
Whitehead, R. (1996). Garrett wagons, part 3, electrics & motors. Tonbridge, UK: R. A. Whitehead & Partners. A superb account of one of the most prominent early makers, with lots of photographs and drawings.
Woods, B. (1999). Municipal refuse collection vehicles – Nostalgia Road volume one. Appleby-in-Westmorland, UK: Trans-Pennine Publishing. A lively account of a fascinating business, with lots about the electrics.

And, of course, for the most up-to-date information, current manufacturers' and other organisations' websites.