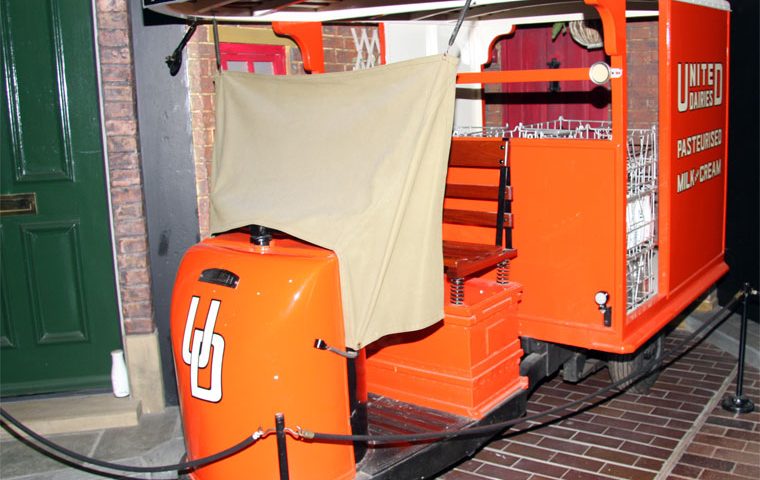 As in the First World War conditions in the second global conflict simultaneously favoured wider use of electrics and also frustrated it.

Fuel shortages prompted the General Post Office (GPO) to replace some light petrol vans with 10/14 cwt Metrovicks in late 1942.  Indeed, in 1943 it was reported that there were 6,000 electrics in use throughout Great Britain – an apparent leap of 2,250 since 1939.  It was said that a quarter of these had a payload of two tons or greater, which was a field most of the pre-war manufacturers had shunned.

On the other hand, familiar shortages of metal, wood and rubber meant that production never kept up with demand.

The Ministries of War Transport and Supply were both interested in the potential of electric vehicles, and towards the end of the Second World War encouraged manufacturers to explore designs that broke with previous practice. There was interest in producing a standard battery electric vehicle which could meet the requirements of the broadest range of customers, yet use common components and optimise road performance. The aim was to have a standard set of drawings and plans that would be available to any manufacturer, and which would enable a vehicle to be constructed in the minimum amount of time. No matter where a vehicle was built, its components would be interchangeable with those from a vehicle built in any factory, thus cutting maintenance and repair costs.

The British Government had already encouraged commercial vehicle manufacturers to produce simplified designs, minimising the use of scarce materials, and standardising parts, in order to balance the demand for new equipment with the need to conserve resources. Thus buses were built to so-called ‘utility’ specifications, with wooden seats, crash gearboxes and box-like bodywork devoid of shaped panelling.

The National Standard Electric Vehicle committee was formed, under the aegis of the Electric Vehicle Association and with representatives of major manufacturers. The payload was agreed to be 20 cwt (1 ton), with bodywork capable of being configured for side or end loading. Plans to build up to 1,000 were announced, but material restrictions meant only the prototype was completed.

However, in 1945 the Ministry was shown another prototype, this time the work of A. C. Morrison who had set up a new firm A. C. Morrison (Engineers) Limited having left his eponymous company. This was a much more ambitious affair.

It was of chassisless construction with an integral chrome-molybdenum steel frame.  The bodyshell was plywood bonded on one side to sheet steel.  This approach kept the unladen weight down to 22½ cwt unladen. It opted for separate rear wheel mounted motors, with epicyclic final drive within each wheel.

Again, the prototype turned out to be unique, although some of the design found its way into the Douglas ACM machine built after the war. It is hard to imagine that stainless-steel was in ready supply in the late 1940s.

As noted earlier, for the purchase of an electric vehicle to stand the best chance of success, the choice of battery and running units had to be tuned to the demands of the customer’s application.  Since manufacturers were liable for ensuring this was so (to avoid allegations of misrepresentation which had been a problem in the past), it was a responsibility they took seriously.

In 1942 Morrison-Electricar introduced a route survey process whereby a company representative would follow a customer vehicle over the intended round for a day, noting every detail of traffic junctions and lights, delivery stops, gradients, and so forth, as well as the falling weight (in the case of a delivery van) or rising weight (in the case of a refuse collector).  With all this data the firm could calculate the optimum specification of chassis, battery and motor.

Throughout the 1940s the shape of the supply industry continued to evolve.

In 1941 AEVM was taken over by Crompton Parkinson (a major electrical engineering concern).  The range was soon marketed under the Morrison-Electricar marque.  Five years later the Austin motor company bought a 50% share of the business which then laboured under the cumbersome title of Austin Crompton Parkinson Electric Vehicles Limited.  One consequence of the new ownership structure was that Morrison-Electricar had access to mass-produced (and therefore cheaper) components and also Austin’s marketing might – especially in overseas territories.

The large engineering firm of Brush entered the fray in the early 1940s, and became a fairly big supplier for several years.  In 1948 it acquired all the rights to the Metrovick range from Metropolitan-Vickers.

The other important entrant to the market in this period was NCB.  The Smith family owned the highly successful Ringtons Tea business in Newcastle-upon-Tyne.  In an extraordinary diversification move they set up Northern Coach Builders, to manufacture bodies for buses and trolleybuses.  From that, in 1945, sprang NCB as a new maker of battery-electrics.  NCB soon established a significant share of the market and in the early 1950s changed its name to Smiths.

From the late 1940s into the 1950s there was a huge national effort to build new homes.  The priority was putting up houses and schools, so providing shops for the ‘new towns’ and the burgeoning estates growing round existing towns and cities was a secondary concern.

Cars were rare and public transport was patchy, which meant an obvious opportunity for mobile shops.  Retail price maintenance rules decreed that large town-centre shops were not allowed to sell many goods any cheaper than they would be at a mobile shop.  The great majority of these vehicles were petrol or diesel-powered, but a small share were electrics.

One reason might be that they were perceived as cleaner and more hygienic in some way, although they were generally smaller.  To emphasize this point a battery-electric mobile shop used by the Berkhamstead & Hemel Hempstead Co-operative Society had on its sides the message ‘A clean food service brought direct to your door’.

The St Helens Industrial Co-operative Society even experimented with a Morrison-Electricar mobile butcher’s shop.  The body, by the CWS Motor Trade Department (of Manchester), featured large display windows, easy to clean surfaces and a roof fan to ventilate the interior.

Many people found themselves in pre-fabricated houses, and estates of these were built around the country to ease a critical shortage of new dwellings.  In Grays, Essex, the ‘housewives’ in the ‘pre-fab colony’ were served by a custom-built mobile grocery shop built for Pearks (a local store) by Scammell & Nephew in 1948 on a Morrison-Electricar one ton chassis. Like in most electric mobile shops customers stepped up to an enclosed serving counter at the rear of the body.

In some versions though, the customer boarded at the rear and picked what they wanted from shelves along each side of the interior, before paying at the till next to the driver’s seat.

A particularly groovy looking mobile shop was built on a 1951 Morrison-Electricar one tonner to sell confectionery and ice cream.  It had a half cab layout so there was a nearside platform which allowed eager children to view treats through a forward-facing display window, and there was a nearside servery in the wheelbase.

There were still opportunities for electrics in commercial and municipal applications, but not the kinds of really large vehicles seen before the war.  The newly nationalised British Railways was an early customer, taking for instance an 18/22 cwt Brush Luton van for trial in Glasgow and a two ton Jen-Helecs tractor unit for delivery work in Eastbourne.  Incidentally, a Luton van is a type of box van where the body extends over the roof of the cab, giving extra space for payload. 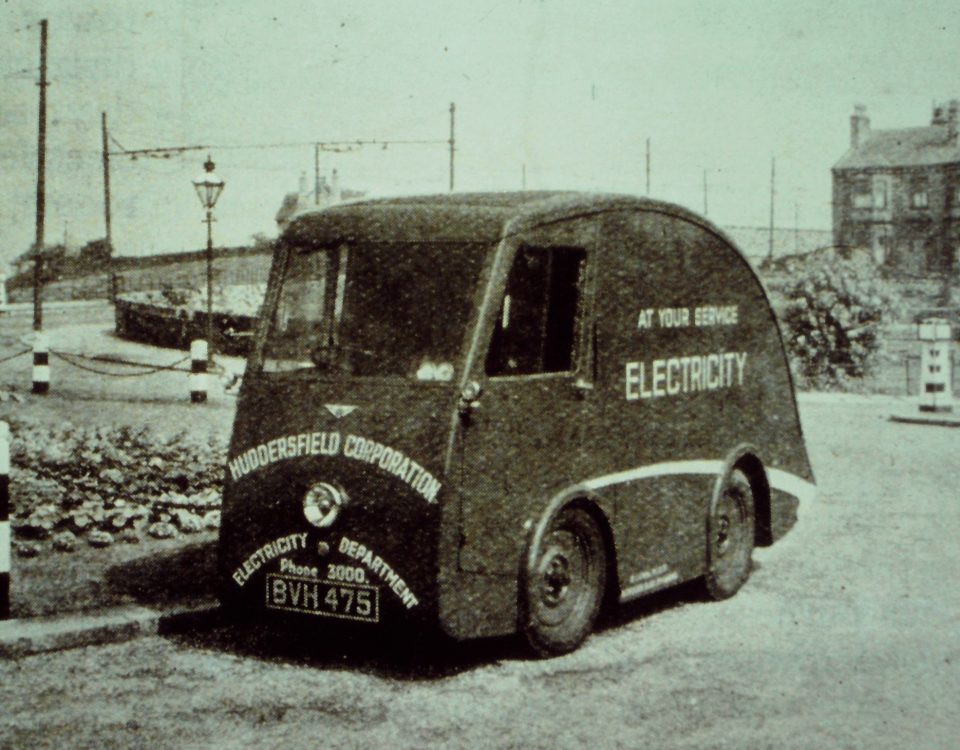 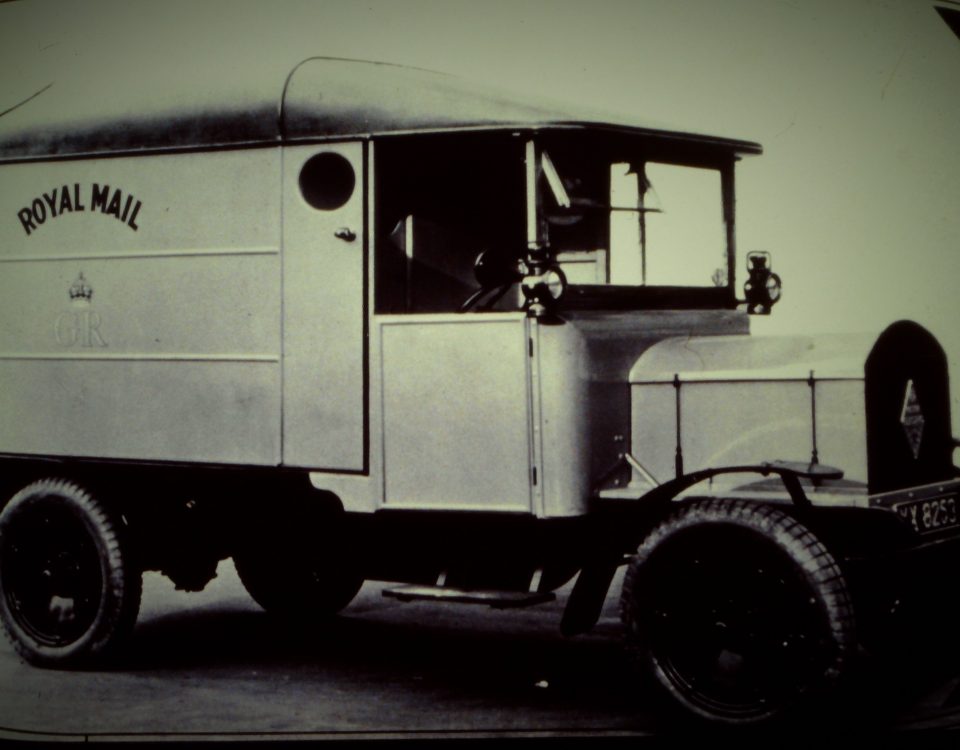 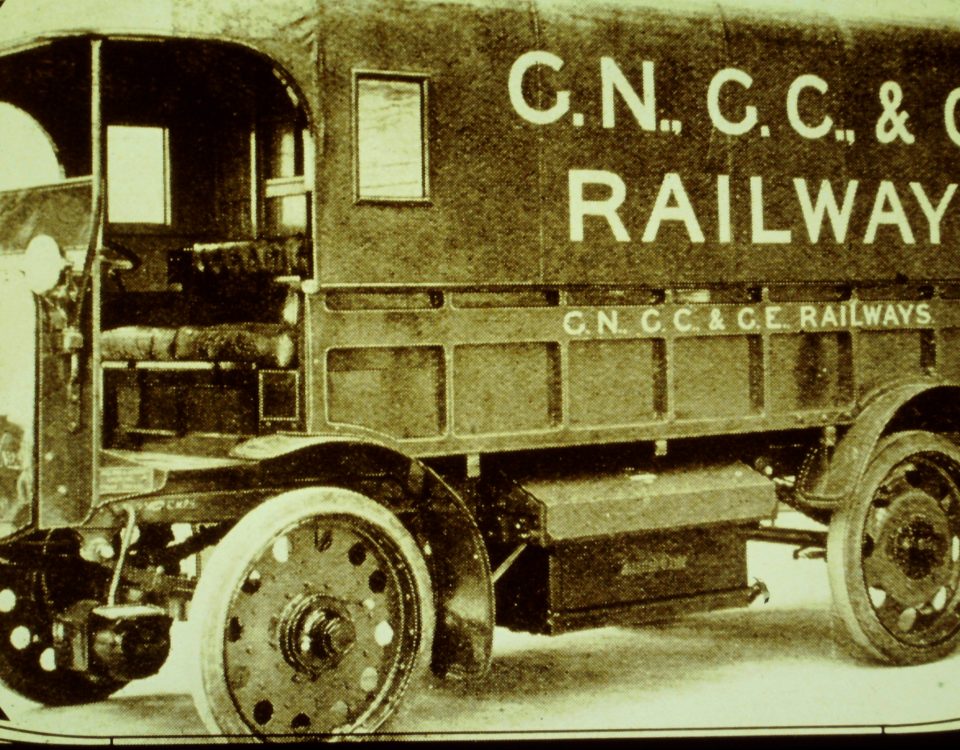